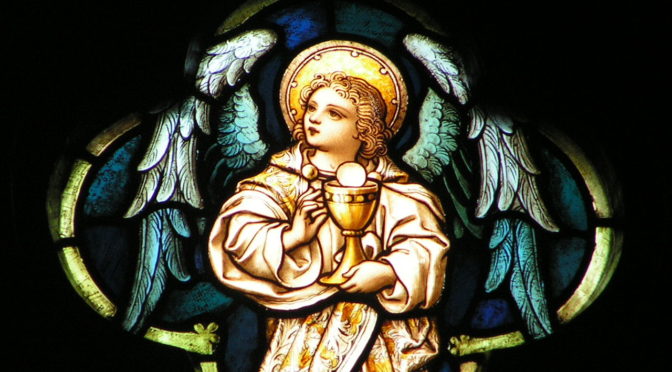 Although we hear a variety of Eucharistic prayers at Mass (another legacy of Vatican II), they share the same long history. In the middle of the second century, St Justin Martyr (whose feast we celebrated last week on 1 June), explained what happens at Mass: “There is then brought to the president of the brethren bread and a cup of wine mixed with water; and he taking them, gives praise and glory to the Father of the universe, through the name of the Son and of the Holy Ghost, and offers thanks at considerable length for our being counted worthy to receive these things at His hands. And when he has concluded the prayers and thanksgivings, all the people present express their assent by saying Amen.”

St Justin describes a scene quite similar to our experience of the Mass: the offertory, prayer, and the great Amen. Outside of Mass, however, the situation was very different. The description we have of the Mass comes from Justin’s First Apology, in which he attempted to convince the Emperor not to persecute Christians just for being Christians. Christians were accused of being stupid (by Celsus in particular, later in the second century), and were “excluded from houses and baths and markets” and even from public places in general. Yet during these same years the Church grew exponentially. (See Larry Hurtado, Why on earth did anyone become a Christian in the first three centuries?) The faith that we have received from St Justin and his contemporaries, and all those who have followed in it down the centuries, has shared this same core: the bread, the wine, the thanksgiving, and our wholehearted assent. May the Eucharist strengthen us to meet all the challenges to our faith with the courage of Justin Martyr and all the saints.