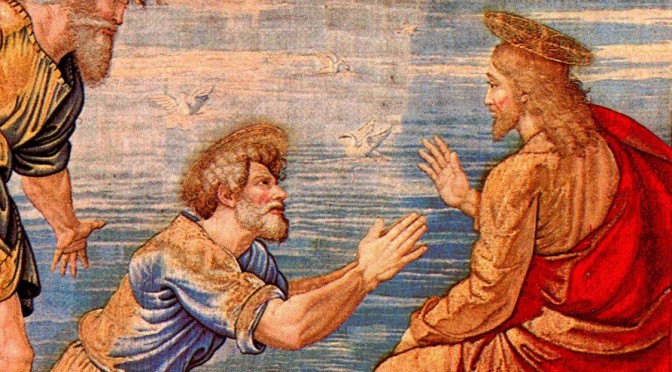 Peter in this Sunday’s first reading tells us, “Obedience to God comes before obedience to man” (Acts 5:29). He has learned this lesson the hard way from Christ himself; indeed he was the man who sought to bend Christ to his will.

However much they loved Jesus, indeed because they loved Jesus, Peter and the disciples could not face him being handed over to death. They sought to prevent it, in fact. One of them, identified as Peter in John 18:10, went as far as to cut off the ear of one of the party who came to arrest Jesus in the Garden of Gethsemane.

Peter is not being completely unreasonable: humanly speaking, handing oneself over to what appears to be a futile death does not seem a rational thing to do. But the wisdom of God far transcends human reason. There was method in the divine plan, even if Peter could not understand it at the time.

And so Christ – hearing, understanding and submitting to the divine plan – was obedient to the will of his divine father, rather than the dictates of human beings, even when they were his friends. This is gloriously summarised by St Paul writing to the Philippians (2:8-9):

“[Christ] humbled himself and became obedient unto death, even death on a cross. Therefore God has highly exalted him and bestowed on him the name which is above every name.”

Through this experience, Peter came to understand that loving Jesus and loving God meant seeking to understand and do the will of the Father: feeding his lambs and sheep even to death. In the light of Easter and the risen Christ may we similarly seek to understand God’s will and devote ourselves to it wholeheartedly.