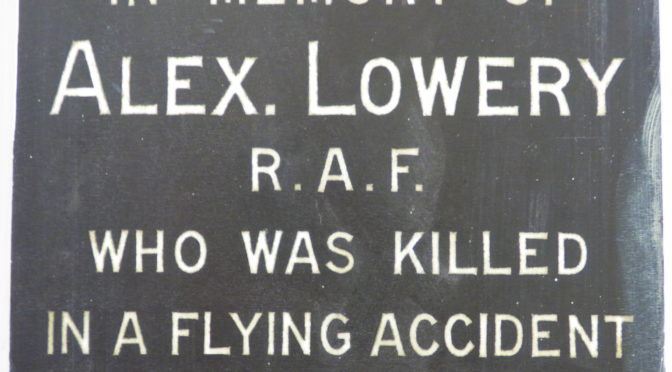 This plaque is in the church porch.

James Alexander Lowery was born on 1 August 1919 and baptised at St. Cuthbert’s RC Church on 28 August 1919.   His parents, Alexander Lowery and Ellen Broughton, had been married at the church on 12 October 1918, and lived at Glendalough, Whinney Hill, in Durham City.

He was killed on Friday 21 July 1939, when the Vickers Wellington Mark I medium bomber (L4290) in which he was the wireless operator, dived into the ground from low cloud at Milborne Port, near Yeovil in Somerset.   All three of the crew on board were killed, the other two (Flying Officer Wilson, aged 25, and Pilot Officer Barton, age 26) were Canadians.   The aircraft was from 148 Squadron, based at RAF Stradishall in Suffolk, and usually carried a crew of five, but there is no explanation as to why only three were on board at the time of the crash.  The aircraft was flying from Suffolk to Plymouth on a training exercise.

James had been an altar boy, and then the sub-organist at St. Cuthbert’s (hence the electrification of the organ in his memory), and had also been a Rover Scout.   He had been a pupil at Darlington St. Mary’s Grammar School, and on leaving school had become a grocer’s assistant, working at Durham and Murton, before joining the RAF.   He had almost two years’ service when he was killed, and had been promoted to AC1 (Aircraftman, 1st class).

Following a Requiem Mass at St. Cuthbert’s in the morning, James was buried at Redhills RC cemetery on the afternoon of Wednesday 26 July 1939 (plot no.142 N4).   The coffin was carried to the cemetery on a gun carriage, escorted by a contingent of men from RAF Usworth (then an RAF fighter base, now the site of the Washington Nissan factory).   A salute was fired over the grave and the Last Post was sounded by a DLI bugler.   During the committal, an RAF plan flew overhead and dipped its wings in salute.   The other two crew members were buried at Stradishall parish church.

Thank you to David Butler for researching Alex Lowery’s story.