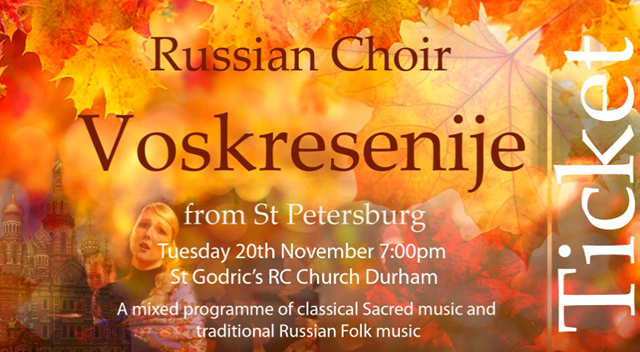 For one night only, Tuesday, November 20th, the Parish of the Durham Martyrs are delighted to welcome to St. Godric’s, Durham, the Voskresenije-Resurrection Choir of St. Petersburg on their tour of the British Isles.

This vocal ensemble, Resurrection -Voskresenije in Russian – was founded by Jurij Maruk in 1993. It consists of nine professional female and male vocalists trained at the St. Petersburg Conservatoire. The repertoire of the ensemble includes Russian Sacred Music as well as folk music. Guest performances in Germany, Switzerland, Norway, Austria, the UK, France and Italy have met with great success, and the choir has recorded several CDs of their repertoire, which includes some specially composed arrangements of Burns songs by John McIntosh.