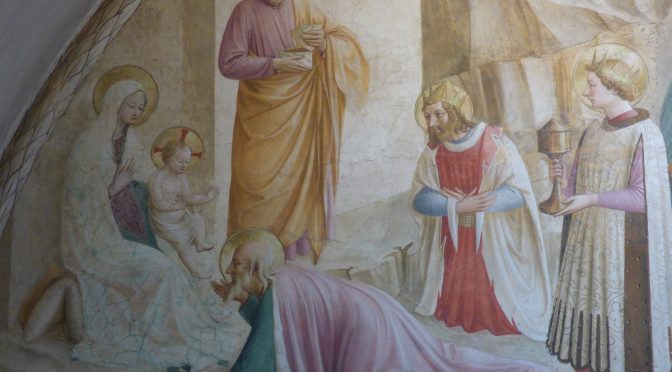 The wise men, or Magi, had travelled from a distant country in the East. They were astrologers, but somehow their study of the stars led them to seek the infant King of the Jews. They found the King they were looking for, not in Herod’s palace in Jerusalem, but in the poor family of Mary and Joseph.

On the feast of the Epiphany – a word which means ‘revealing’ or ‘manifestation’ – the Saviour begins to become known to all the nations as a light of hope, shining in the darkness of our world. The Magi were pagans, but they were sincere seekers after truth. They brought costly gifts: gold for a king, incense for the Son of God, myrrh symbolising Jesus’ suffering and death. The Magi were delighted to recognise and worship Christ, while Herod and his courtiers were ‘perturbed’ at the thought of another King arising in Israel. As we know, Herod did not hesitate to commit murder to protect his position. In contrast, the Magi show us an example of true discipleship: ready to recognise Christ, wherever we find him, and ready to bring the most precious gifts that we have to honour him.