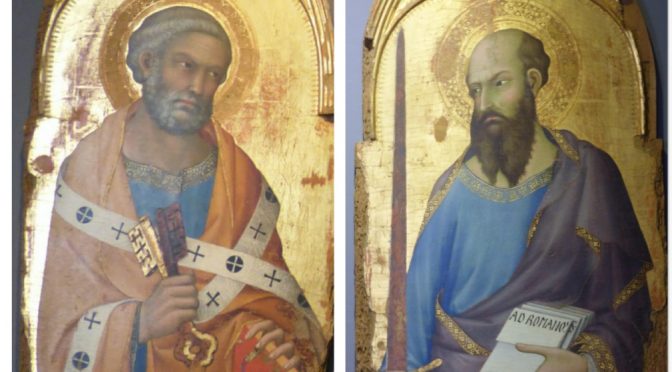 Today we celebrate the Feast of Saints Peter and Paul. Though they are saints, they weren’t perfect. Peter was a hotheaded character; he was impulsive and generous, but sometimes unreliable. There was an irony in Jesus’ renaming Simon as ‘the Rock.’ In today’s Gospel, Peter makes a bold statement of his faith in Jesus: ‘You are the Christ, the Son of the Living God.’ But on the night that Jesus was arrested, Peter, afraid for his own life, denied even knowing his friend. He would reproach himself for his betrayal for the rest of his days. But Jesus forgave Peter, and told him, ‘Feed my sheep’ – take care of the disciples.

Peter was an ordinary working man, a fisherman. Paul was more educated; he had been trained as a rabbi, and had studied the Scriptures and philosophy. Paul, too, could be hot-tempered and outspoken. Peter became the leader of the early Church, while Paul was the first great teacher and missionary. But it was a bumpy road. We read in the New Testament of the arguments between Paul and Peter, as the faith spread and the Church grew.

What Peter and Paul had in common was that their encounter with Jesus  changed their lives. Peter was one of the first disciples to be called. The call of Paul happened on the road to Damascus. For each of them, once they had met the Lord, there was no going back. Both apostles gave their lives for the faith; they were martyred in Rome at the time of the Emperor Nero.

To be a Christian is to put our faith in Jesus, as Peter and Paul did; to say with Peter, ‘You are the Christ.’ Once we have made our act of faith, there is no going back for us. We will face challenges and we will sin. But, just as the Lord did great things through the apostles, now he wants us to play our part in building his Church.