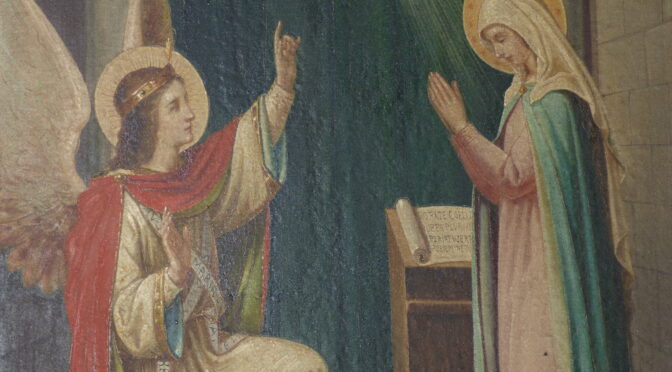 Mary was very young when the Angel Gabriel appeared to her – still in her teens. She lived in a small, obscure village in a remote part of the Roman province of Palestine. Almost certainly, she had never travelled far from her home. But God chose Mary for a unique part in the plan of salvation.

Luke tells us that Mary was ‘deeply disturbed’ when the angel spoke to her, and she wondered how she could conceive a child when she was still a virgin. Her reaction is not surprising. But, as the angel Gabriel tells her, nothing is impossible to God.

Although she couldn’t foresee everything that would happen, Mary must have realised that God was about to turn her life upside down. She had expected to marry Joseph and start a family with him, and instead, she would give birth to the Son of God. Nothing would ever be the same again.

God gave Mary a choice, and she said ‘Yes’ to God’s plan. She trusted herself completely to God, and put her life into God’s hands; and so God’s plan to save us from our sins could unfold. As we draw closer to Christmas, we celebrate Mary’s ‘Yes.’ She is a model for us; every disciple is asked to say ‘Yes’ as Mary did, and to welcome Christ into their lives.