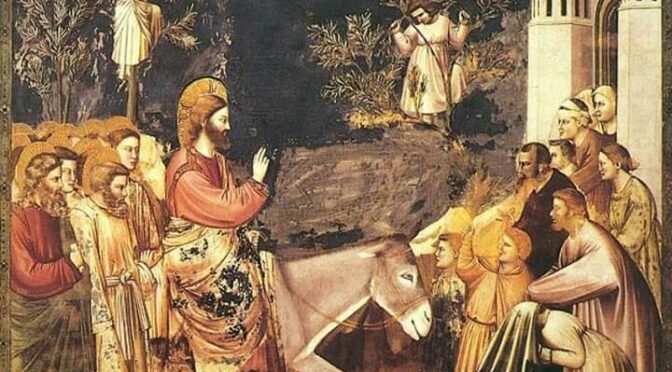 Today’s Mass begins with Jesus’ triumphant entry into the city of Jerusalem. The crowd are shouting ‘Hosanna!’ And yet, a few days later, the same crowd are shouting ‘Crucify him!’ What has changed? Mark tells us that the chief priests incited the crowd to demand the release of Barabbas instead of Jesus. It’s easy to whip up a crowd into an angry mob – not so easy to control the mob’s lust for blood. Even Pontius Pilate, with an army under his command, is afraid of the crowd. He releases Barabbas – guilty of murder – and hands Jesus over to be crucified, knowing him to be innocent. The soldiers make fun of Jesus and the passers-by jeer at him. Even the robbers being crucified with him join in with the mockery.

It’s a scene that has been repeated many times, throughout history; a crowd ganging up on a helpless victim. Everyone joins in, for fear that they could be the next target. But this time, it is different.  At the moment of his death, Jesus cries out, ‘My God, my God, why have you forsaken me?’ These are the words of a Psalm – a prayer of hope and trust in God. With his last breath, Jesus is calling on his Father to witness his suffering, and expressing his trust in the Father’s plan. He knows that God has not forsaken him.